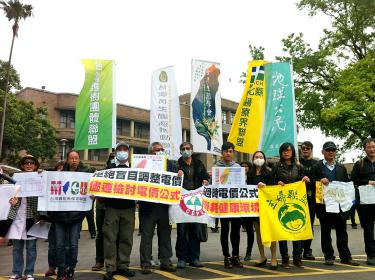 Members of various environmental groups hold banners outside the Executive Yuan in Taipei yesterday in a protest to urge the government to review its electricity pricing policy.

A coalition of environmental groups yesterday rallied in front of the Executive Yuan, demanding that the government withdraw an electricity price cut, saying low electricity prices could lead to overdependence on fossil fuels and obstruct development of green energy sources.

The reduction, which was implemented yesterday, lowers electricity rates by 9.56 percent on average, with households expected to see their monthly bill drop by NT$80, while industrial users could see a NT$400,000 reduction.

The groups said that the Ministry of Economic Affairs’ formula for electricity price calculation does not reflect real costs because it does not include the external cost of air pollution caused by fossil fuel power generation.

The rate cut could also hamper the development of green energy sources and greenhouse gas reduction, they said.

Changhua County Environmental Protection Union secretary-general Shih Yueh-ying (施月英) said the external cost of coal-fired power generation is the highest among all types of power generation, but this was not taken into consideration when rates were adjusted.

The nation still relies on coal as its principal fuel.

“Taiwan’s low electricity prices have suppressed the development of renewable energy, which accounts for less than 2 percent of the total power generation. Higher but reasonable electricity rates are important to make the public and industry conserve energy and shift to green energy,” Shih said.

The rate reduction was meant to share state-run Taiwan Power Co’s revenue with the public, but environmentalists said there are better ways to use the money.

“Revenue can be used to replace old power generation facilities with more efficient and environmentally friendly models, such as natural gas-fired generators. Cleaner power generation, even if more expensive, can help increase life expectancies in central and southern Taiwan, so reducing air pollution rather than lowering electricity prices is the most important thing to do, ” National Chung Hsing University environmental engineering professor Tsuang Ben-jei (莊秉潔) said.

According to a poll by the Chinese-language Global Views Monthly conducted in February, 52 percent of people are willing to pay more taxes to fund air pollution reduction programs, and 74 percent are willing to accept higher power rates to increase green energy use, Yeh said, calling on the government to respond to the public’s demand for cleaner air and a healthier environment.