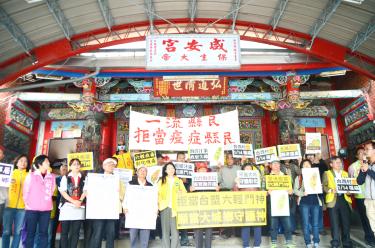 An assembly of environmental protection groups yesterday launched a petition in Changhua County’s Dacheng Township (大城) calling on candidates for county commissioner and Dacheng Township mayor to commit to reducing pollution by the No. 6 naphtha cracker complex in neighboring Yunlin County.

The groups asked the candidates to openly voice their objection to proposed expansions plans for the complex.

Dozens of members of the groups rallied outside Sianan Temple (咸安), holding banners and shouting slogans, as they called on the candidates in the Nov. 29 elections to show their care for people living in Dacheng’s Taisi Village (台西), located next to the facility.

They urged candidates to refrain from shielding the site’s managers, who are appointed by the Formosa Plastics Group, from government regulations on pollutant and wastewater emission caps.

In response, township mayor candidates fitted loudspeakers on their campaign vehicles, pledging to safeguard residents’ health while directing public attention to the petition.

The groups alleged that one out of every 14 residents in the townships have cancer due to pollution caused by the industrial complex, with a foul stench permeating the air during summer.

Taiwan West Coast Preservation Union director-general Hsu Li-yi (許立儀) accused the Changhua County Government of apathy, saying it ignored the issues despite criticisms and complaints by local councilors and residents about the pollution.

By signing the petition, the candidates are making a promise that they will support pollution reduction, secure compensation for affected residents and carry out research on possible diseases caused by the complex, Hsu said.

Fangyuan Township (芳苑) Anti-pollution Self-help Group head Lin Lien-stung (林連宗) said that the county government should conduct its own water quality tests to ensure that fish farms along the nation’s west coast are free of heavy metal and other toxic discharge from the complex.

Taiwan Water Conservation Union director-general Wu Li-hui (吳麗慧) accused the Environmental Protection Administration of increasing the cap on the amount of water the complex is allowed to use daily from 257,000 tonnes to 350,000 tonnes, which he said has caused serious land subsidence near the area where the High Speed Railway system passes through.

In addition to requiring candidates to commit to providing solutions for the aforementioned problems, the petition asks them to require the Formosa Plastics Group’s management to hold public hearings before any future development plans are implemented.